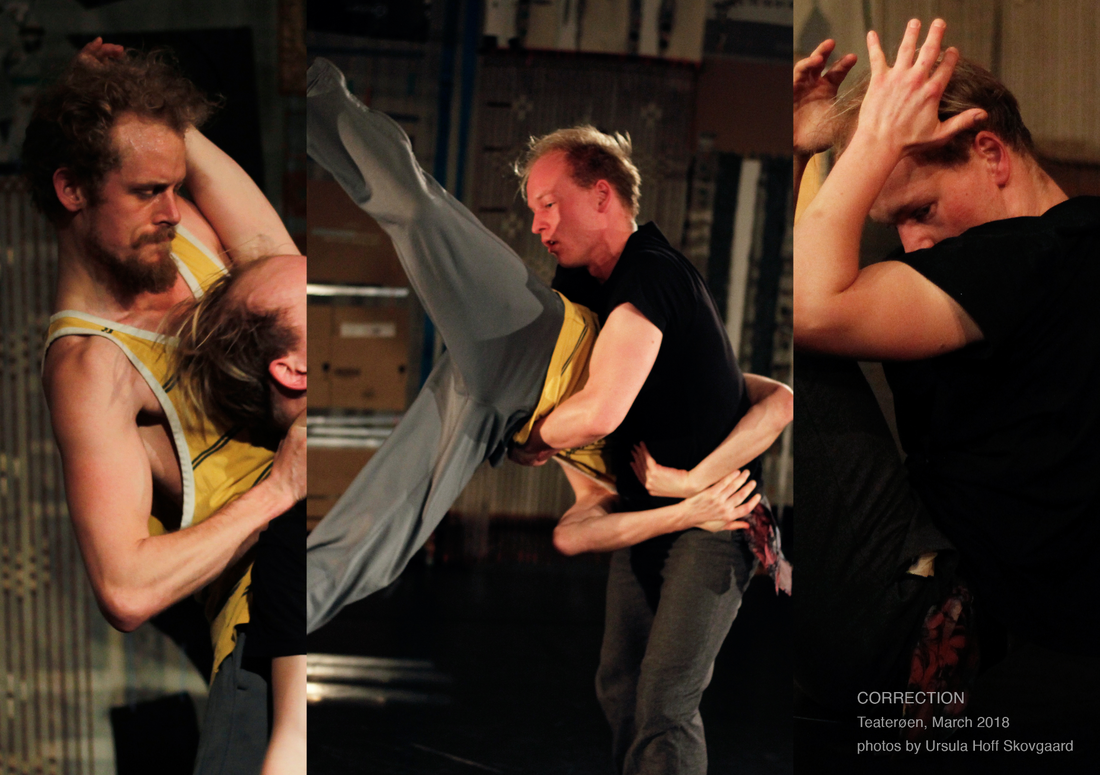 BENDIK RIIS - AUTOPSY OF THE MYTH 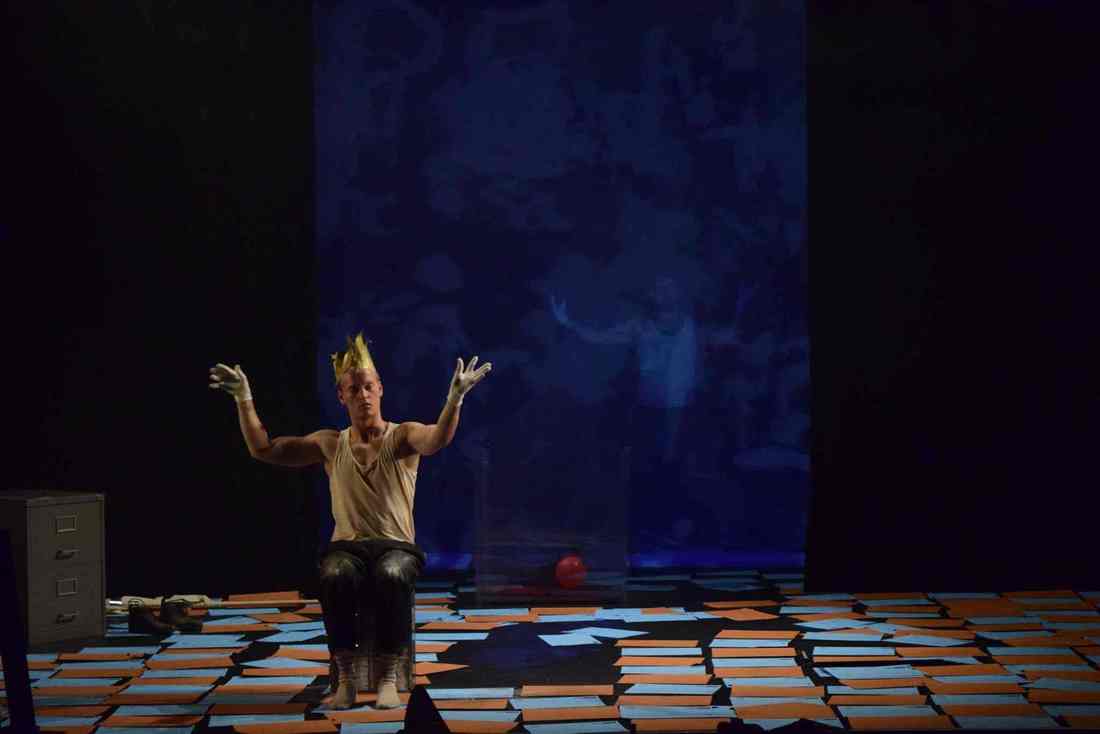 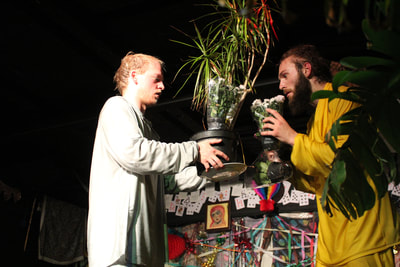 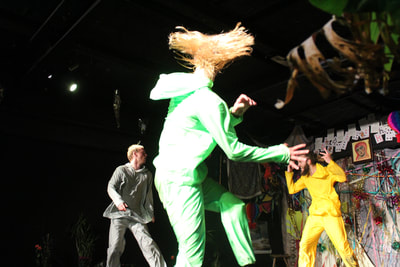 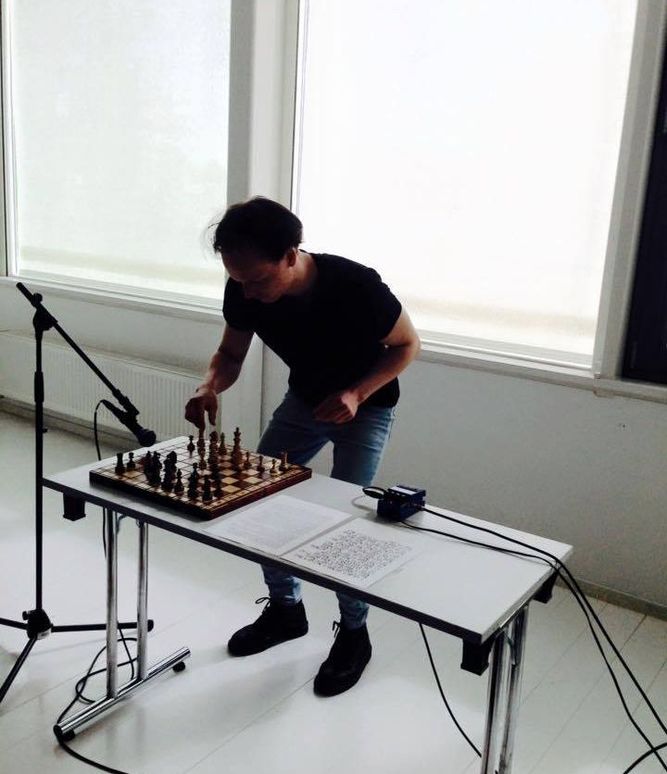 Is there a certain rhythm, a certain musicality in a chess game? In the tradition of the ready-made and the compositions of John Cage this piece uses the notation of a famous chess game as a musical score. Two chess boards are mic’ed with contact microphones and put through a sound mixer making every move a percussive sound. I interpret the game as a piece of drama and a piece of music carried out in the atmosphere of a classical concert with sudden outbursts of appreciation. The piece is both a concert but also a strange scene in which a man plays chess with himself, playing around with the myth of the lone genius.

Created and performed by Anders Tougaard

NIGHT JUST BEFORE THE FORESTS 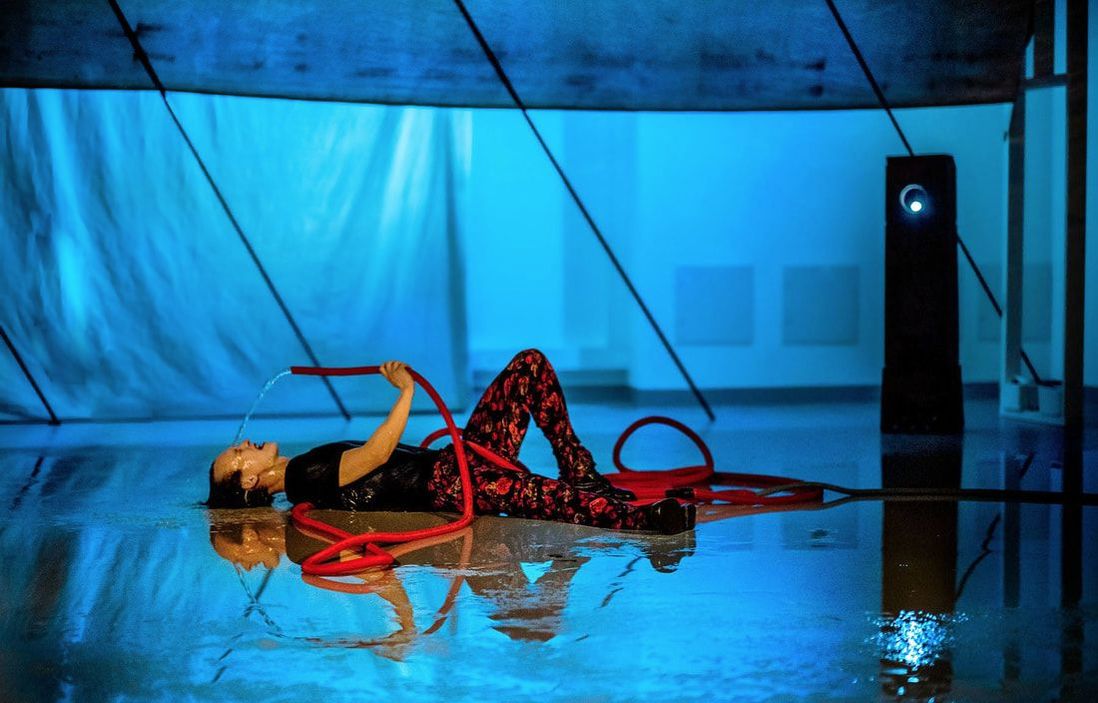 ​Bernard Maria Koltes’ text is a night-time odyssey through the underbelly of the city by a man trying to make sense of his life and outsider status as a foreigner. In the inhospitable city, he must cast himself upon the kindness of strangers. The soliloquy goes on and on until the words empty themselves and in the end there is nothing else to do than pull the tongue out of the mouth, and dance with oneself.
Staged in a white cube with theatre curtains on the outside of the windows the performance deals with alienation and listlessness and the audience is addressed directly making them the silent other. 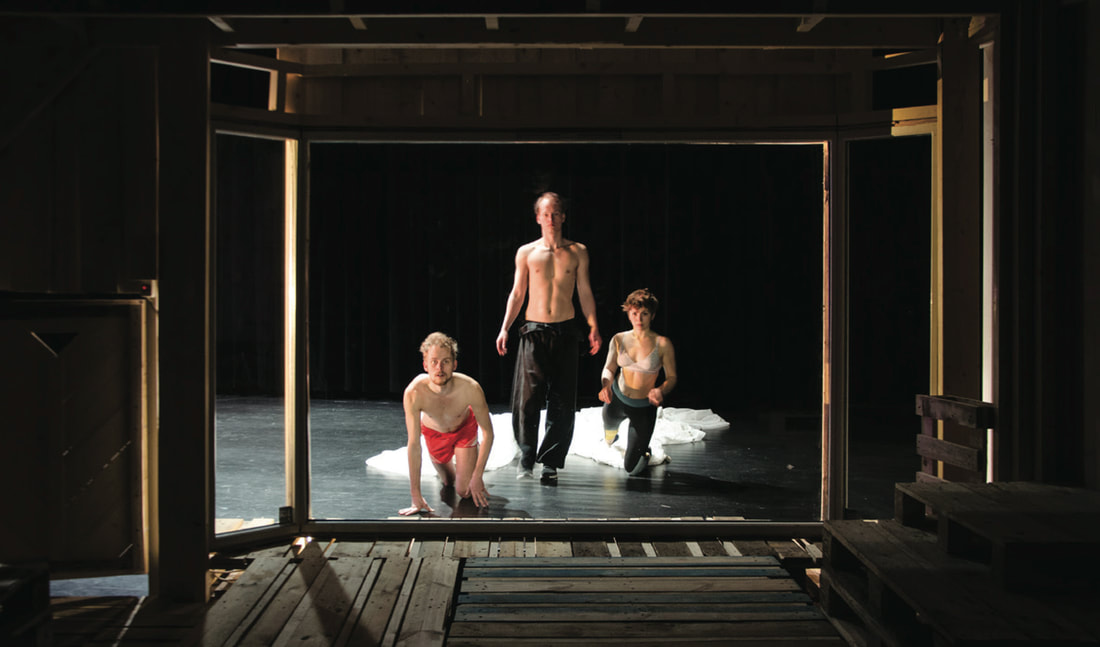 ​That Light Inside is an immersive cabin trip performance about self realization and spirituality.
​A humoristic journey into the darkness of our contemporary soul led by the superhero of our time the therapist. Holding our shaking hands, the guru will guide us in the quest to find that light inside. The performance takes place in a wooden hut built inside the black box and the situation is a therapy session inspired by gestalt therapy and the shaking practises of Kundalini yoga. The performance offers a space for reflection on the struggle to become the best version of you.

Norwegian Theatre Academy, Norway 2016
​
Created by Katrine Leth Nielsen, Elizabeth Damyanova, Mari Lassen-Bergsten Kamsvaag, Marina Popovic, Tobias Shaw Petersen and Anders Tougaard
Performers: Katrine Leth Nielsen, Marina Popovic, Tobias Shaw Petersen, Anders Tougaard
STUFFED CAMEL
Based on Camus’ philosophy of the absurd the piece explores the dramaturgy of music theatre with the help of the old sonata form. Musically ranging from avant-garde noise to naïve melodies and poodle rock the performance is composed of a wide scope of text sources such as, Max Schreber, television soap opera, the actors’ Facebook walls, and a podcast about the lack of the colour blue in Homers writing, all combining to create an absurd hymn to the beauty of life’s randomness. 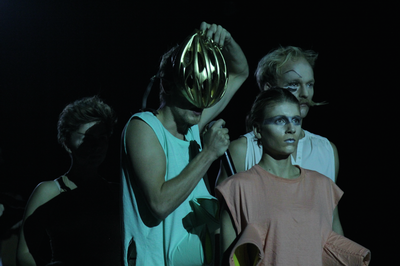 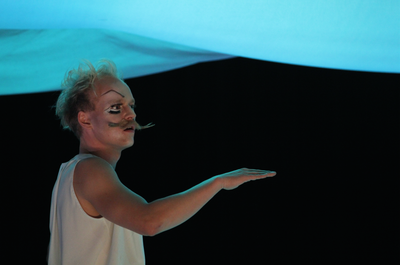 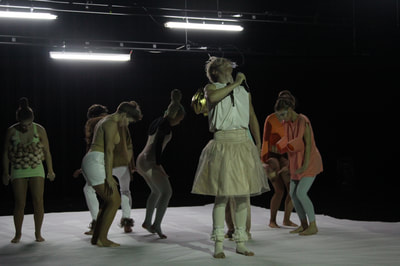 Hamlet Machine under Rommen’s direction is a Wilsonesque performance with lyrical choir parts. The acting is stylized and the scenography minimalistic to let the soundscape and voices bring out Heiner Mullers dense text; a humorous critique of the idea that one can stay innocent in this world. It reflects on east European history, the role of the intellectual in a torn society, revolution and personal trauma. 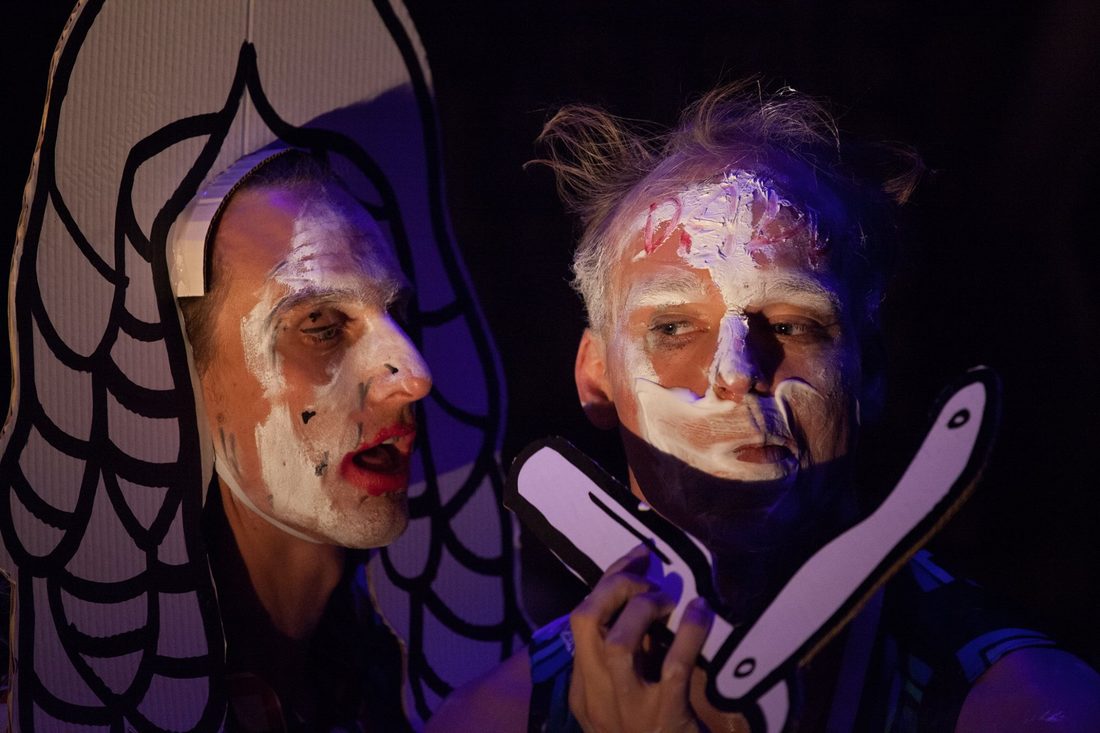 ​​“A visceral romp through grand guignol, revelling in camp and black comedy. The production was created from the actors’ visual, physical and written responses to the film “Whatever Happened to Baby Jane?”.  Robert Aldrich’s 1962 “grand dame guignol” starring Hollywood rivals Bette Davis (Coke®) and Joan Crawford (Pepsi®). In its time “Baby Jane” was a critical and commercial success, due in no small part to the well-known enmity between Davis and Crawford. It was ground-breaking for its controversial plot spun around a theme of deep-seeded sororal hatred and casting two aging women in lead roles in a horror film, at a time when ageing women generally didn’t get any roles in Hollywood.
​The production uses the film itself to frame students’ responses to it. In this sense Hollywood Dolls is an echo of that which inspired it, a continuous play of reflections, always looking back at itself like the reverse shot of Bette Davis looking into the back seat of the car to see if the body of Elvira the maid is still there, still dead. But over time, as rehearsals unfold, through relentless physical commitment (that film, by nature, can at best only reflect), play and associations that begin to multiply like fractals, the piece begins to reshape and escape it’s reflexiveness, creating an other-worldly theatrical universe complete unto itself.” - Radiohole 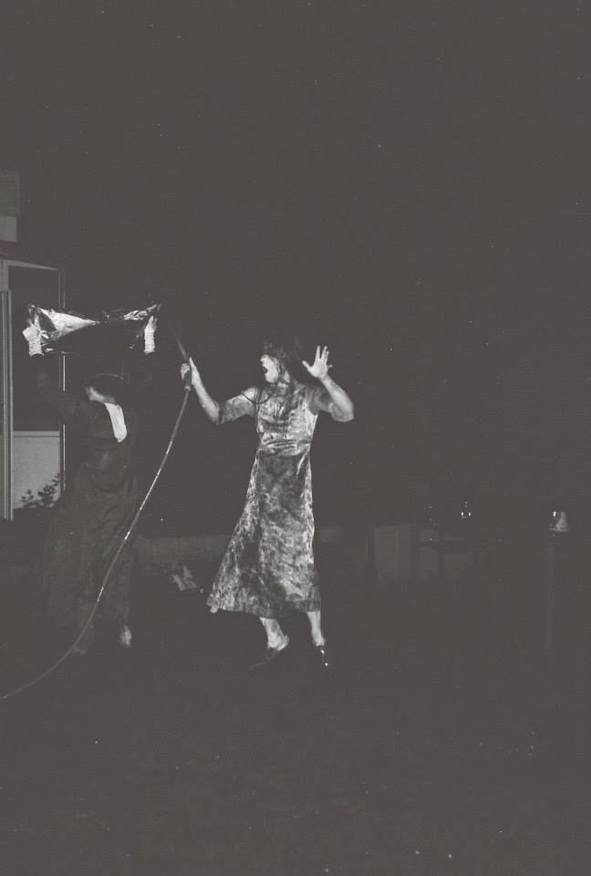 ​An outdoors party performance inspired by Shakespeare’s the Tempest. Three ghostlike men in dresses dance a gestural choreography as the building behind them is pouring water out of its windows and roof and the sound of a storm is heard inside. Prospero is putting a spell on it and his curses are ringing against the dark sky. The audience is sitting outside with drinks in acelebration of magic and the forces of nature.